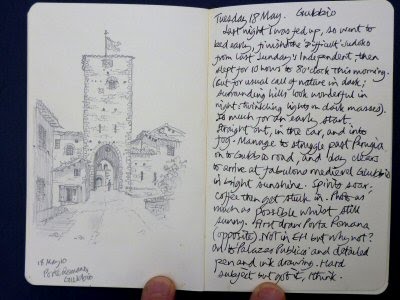 Last night I was fed up, so I went to bed early, finished the ‘difficult’ sudoku from last Sunday’s Independent, then slept for ten hours to 8 o’clock this morning (but for the usual call of nature in the dark; the sleeping hills all around look wonderful at night, twinkling lights on dark masses). So much for an early start, but straight out in the car, and into fog. Manage to struggle past Perugia on to the Gubbio road, and the day clears to arrive at fabulous medieval Gubbio in bright sunshine. Spirits soar; coffee with a view from the Piazza Quaranta Martiri the get stuck in. Photograph as much as possible whilst the sun shines. First draw the Porta Romana in sketchbook. Not in EH, but why not?

On to the Palazzo Publicco and do detailed pen and ink drawing on smooth watercolour pad. Now called the Palazzo dei Consoli. An unforgiving subject, but I’ve got it I think. Draw from a slightly different angle than EH as it suits me better, compositionally. It is much the same as in EH, but since restored with glass in the upper windows. Lunch, then on the S. Giovanni Battista, which has been completely restored since !905, with a new rose window. (The one in the book was half bricked up, with a wooden door in the middle). I find the whole city charming, quite captivating, and would return. Halfway through attempting watercolour of S.G.Battista, the sun has gone, and the rain comes. Run for cover; not a bad stab at a watercolour impression, but not good light and fighting the day, so ultimately spoiled. Pouring as writing this in café, having tea, and time to go home. (Now 5.30 where did the day go?). A good one though, considering.