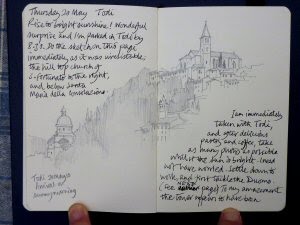 Rise to bright sunshine! A wonderful surprise and I’m parked in Todi by 8.30am. Do the sketch on this page immediately as it was irresistible (if not in EH) the hill top church of S.Fortunato to the right, and below Santa Maria della Consolazione. I am immediately taken with Todi, and after a delicious pastry and coffee, take as many photos as possible again while the sun is bright. I need not have worried today. Settle down to work, and first tackle the Duomo ( in the sketchbook).

To my amazement the tower appears to have been completely rebuilt since 1905, although this is not mentioned in my DK (Dorling Kindersley ‘Umbria’) guidebook. In EH there was an additional six sided upper storey with some sort of castellations and a short spire. Now the tower is squared off at its natural top, and instead of twin arches, there are single arched openings, one above the other into the belltower. Otherwise the façade is unchanged. Lovely.

Turning around 180 from the same spot, one sees the Palazzo del Popolo (Palazzo Pubblico in EH). This is entirely unchanged, but most enjoyable to draw, so that was the next one in the sketchbook. I was in good spirits already, when from the middle of the square a young voice calls out “Hi Chris!”. I look around, and an Italian schoolboy is delighted to see me again. It was one of the schoolparty that annoyed me in Spello.

As I waved back, another, a girl calls out “Hey Chris!” and smiles. It was charming and I eat my words from yesterday in Spello. How unexpected to be cheerfully hailed by an acquaintance in the middle of an Umbrian Piazza.

The day was fine, and I was keen to keep my last appointment, with Santa Maria della Consolazione. Not illustrated in EH, but very much recommended by the author as one of the finest Renaissance churches around. I entered the church, which was empty save for a cleaner, and sat for some time. It was indeed a cleansing experience. A perfect domed cross inside, it is uncluttered and pure, and retains the intention of simplicity and wonder. I could not find an obvious view to draw the exterior, so postponed this, and returning to the car, drove off into the hills. I photographed some views of Todi, and other subjects but didn’t settle (apart from one small sketch across some farms and hills). Then I had a brainwave and bought some food and wine/beer from a supermercato, and returned to my ‘ghost’ hotel (still no-one else visible) and spent the late afternoon and evening finishing off drawings etc on my terrace overlooking the hills.

Today as I wandered around the ancient walls of Todi and wound my way up on foot through the wooded and steep ‘via Serpentine’ path from S.Maria della Consolazione, I heard a cuckoo, and pausing to gaze across the sweet, quiet hills, I thought I could feel the real Umbria getting through. It is as though on arrival Umbria threw its rain at me, its wind and clouds and darkness, but I persevered. I kept drawing, ruined two watercolours and soldiered on, drenched, through Assisi. Then, quite simply this morning, she threw open her arms and said;” Look, this is how I can be, a paradise to rival any Arcadia of the ancients; come to me with an open heart and I will feed your soul!”. Now I’m beginning to sound like EH!