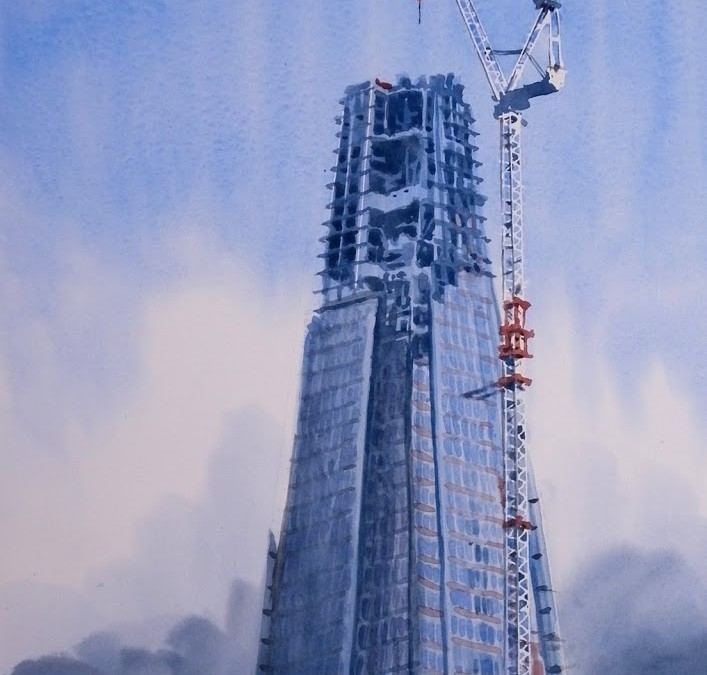 Yes the painting is nearly finished, but it was the subject I was referring to, known as The Shard.
This is the most exciting architectural accomplishment of the decade in the City of London, and now the tallest building in Europe.

I was very struck by the photos I’d seen of its construction recently and couldn’t resist depicting it just as it’s almost completed. Who would be the crane driver up there? I’m not even good up stepladders, it makes me ill to think of it. But the sight of the crane is so dramatic and the image fills me with wonder and questions. Once it’s finished how do they then get the crane down again? At the moment it looks as though it’s nailed to the side of the skyscraper.

Fortunately I had other things to worry about, like how to paint it? Well, it’s watercolour on smooth Arches watercolour paper, which produces that very silky look to the clouds at the bottom. If you look at the close-up image below you will see that I started by drawing the crane in with a fine masking fluid dispenser in a freehand sort of way, and then washed in the sky and building colour over the top. When all was dry I rubbed off the masking fluid to leave the crane white on the page.
I deliberately painted in the rest of the building with nothing smaller than a number 8 sable and quite freehand to (hopefully) stop it from being a fussy and tight architectural illustration. The colours are a bit ‘London grey’ but it’s saved to my mind by the red on the crane and the building details.
Love it or loathe it (the painting as well as the Shard) it is truly a ‘contemporary’ view, from earlier this month and the City of London’s leviathan will soon be complete.