Sunday 23 May Return to Todi 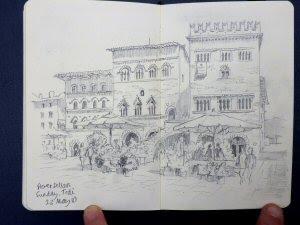 Writing this back at Perugia Farmhouse in early evening, sitting on a chair in bright sunshine overlooking a magnificent hilltop view across Perugia and the hills. Awoke this morning to a clear blue sky, and a warmth that was to last the day. I decided to return to Todi for the morning, as it was en route back, and at nine I was at the Porta Romana. Walking up the steep cobbled via Roma, I felt like I was the only person in the city, save a few older souls making their way to Mass.

However as I emerged into the Palazzo del Popolo there was a flower festival setting up, so I sat to one side, and painted a small detailed study of the main door to the Duomo. After a coffee the place was busying up, and I couldn’t resist doing a sketch of the delightful scene before me, in the book, which will make a lovely painting, with its colour, and festivities. Being happy in my surroundings, I carried on and drew again from a different angle. The light was so good I took lots of photographs before exhausting myself and returning to the car. I decided to return to Perugia Farmhouse by the slowest and prettiest route, but stopped almost immediately outside Todi, on impulse to record another quick watercolour of the city from a distance which came off OK. And all this on a day I was going to take it easier!

It’s been an enjoyable finish to an inspiring week; and the drive back, dawdling up hill and down dale via Masciarno, Spina and Pila was a treat. It seems like an indulgence at this point of great uncertainty in my circumstances, to spend a week in Italy with an old book, retracing the footsteps of another artist A.Pisa and the writer Edward Hutton. But then it is important, at a crossroads in life, when all is not clear, to believe in one’s own ‘story’. You create it with your family life and your work, and if you stop have faith in it, then it can lead to disappointment and regrets in old age. Better to keep writing the story as you would wish it to be; and weather the overcast day until the sun shines once more.