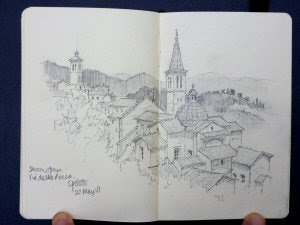 With only one week’s sojurn in the Umbrian landscape I have been necessarily selective in the places to which I have been. EH went on to Cita della Pieve (for the sake of Perugio, his birthplace), Foligno, Montefalco, Fabriano, and even Urbino, which now I now longer in Umbria, but way to the east, deep in Le Marche. But it was the frescos of Luca Signorelli, and paintings by Piero della Francesca and other Umbrian artists that he sought. My agenda is different.

Thus, as EH said; “Spoleto is a beautiful city of rose colour set on a high hill”, I set off back across country to the east, through high, twisting roads to reach Spoleto by nine this morning. Remarkably, I found a free parking area immediately to the north, and lower edge of the city walls, and climbed up through the narrow streets seeking coffee and inspiration. Pausing halfway up to consult the town plan I had wickedly torn from my DK book, I found I had left my spectacles in the car. No choice but to turn back. My arms are no longer long enough to read or draw. The trouble with all these hilltop towns, is that you either have to walk up, or down. Twenty minutes later I was ready for my first cappuccino of the day.

Without preconceptions of Spoleto, I was not disappointed, The sun shone for the morning, with reservations, and I settled to the view in the sketch book looking down over the Duomo and city from the via della Rocca. This held great appeal for me, despite the fact that the tower was shrouded in scaffolding and plastic sheeting. Thankfully local postcards provide the missing detail.

Down and round the corner and the façade of the Duomo was striking in its setting. I sat and drew it on my cartridge block, but somehow I haven’t quite ‘got it’. The drawing is in some way weak. It is a difficult perspective, and the solidity of the scene is missing. As I stopped for lunch the sunshine, erratic now momentarily blessed the Piazza della Liberta, and I thought what a lovely painting it would make with it’s cafes and air of joi-de-vivre. My sketch in the sketch book was fun to do, and I continued to sit there and write postcards to neglected friends, to prolong the moment.

After this the afternoon was getting on, and the weariness from my week was catching up. It’s hard on the limbs treading the steep slopes of Umbria, and crouching for hours on a canvas stool! I continued to photograph what I could, then found my way back to the car and set off to the west. The drive from Spoleto to Acquasparta is rather magical in the evening sunlight. The roads however require much concentration, as they are mountainous and unexpected. I managed to stop once, where the road widened out, by a crumbling farmhouse which detained me for a small sketch in my book, of which I may make something in due course. And just before returning to the hotel another farm on a small hillside looked so ‘typico’ in the evening sun, that again I had to try and catch an impression in the book.

There is a ‘last day’ feel about today, even though I have another full day tomorrow before flying home on Monday. I shall be content if I take home no more that I already have.