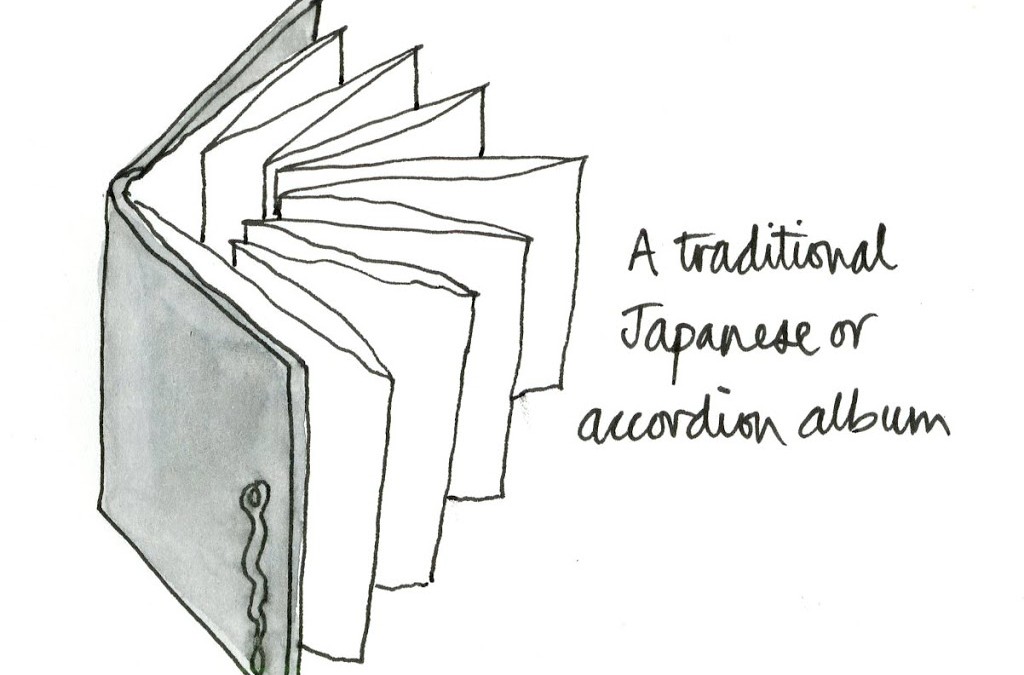 Creating a what? A Japanese album is sometimes known as an ‘accordion’ album, as the pages are joined zigzagging continuously throughout the book. This means that the whole album can be folded outwards to form one long strip of paper. Moleskine make them as small sketchbooks but I wanted to make my own for a very particular purpose.      As from this month I have been invited to be the Artist-in-Residence at the Theatre, Chipping Norton for a period of one year. Having held a solo exhibition of paintings there early last year, I am very excited at the prospect of a cultural partnership with such a lively and vibrant creative centre as the Chippy Theatre! I know that as a part of this experience I want to record regular drawings and notes in a sketchbook to form a ‘diary’ or journal over the coming months, but in what form? It occurred to me that if I made a sketchbook in the form of a Japanese album then at the end of the year it could be unfolded and displayed as a whole which would surely be very dramatic. (Theatre-dramatic-see what-I-did?) Awesome thought. But the Moleskine ones, lovely as they are, are too small. The answer – as our house has always doubled as a Blue Peter studio – make my own!   First of all the cover – two pieces of 2mm thin scrap mdf board cut to 190mm squares (that’s 7.5″ in old money). Cut a square hole in each and cover them (as shown in the first photo) with cotton fabric cut out of the back of a shirt that doesn’t fit any more. (Also it’s just the right colour for the Theatre!)

Next produce two little pen and watercolour drawings to insert into the windows on the front and back cover! In this case a view of the Theatre on the front, and a view of the Chequers pub next door for the back. I also cut some clear cellophane film and stuck that in first, to keep the sketches from getting grubby over time.

I backed the pictures with white card, and then covered the inside covers with local maps including Chipping Norton and Oxford. Fear not! I didn’t cut up Ordinance Survey maps, just used an old cheap motoring atlas such as you can buy from garages. TIP – a double-sided tape gun is brilliant for making stuff like this, but if you don’t have one, you can get double sided tape from craft suppliers and art shops.

This is where I made my first purchase of the project – a visit to Hobbycraft (Oxford) en route to taking Henry back to Uni in Salisbury! I bought 4 sheets of A1 size cartridge paper, and I calculated that each sheet would give me 15 pages in my sketchbook if I cut them into 160mm wide strips and scored and folded them carefully. I used a long metal ruler and tore them along the top edge to give a ‘character’ edge to each page. It’s not a difficult operation but should be done carefully for a nice result. The paper was medium weight – 120gsm, heavy enough to take a light watercolour wash, but not as clumsy and thick as card would be, I joined the folded strips together and then taped each end on to the cover, No secrets here, but again the more care you take the better. One small indulgence was a roll of self-adhesive tape in spotted dark green, but it makes the spine and the inside cover sooo nice! Total cost from Hobbycraft £1.10 per sheet of paper, £2.99 for the roll of tape (Lots left over) total spend £7.39.

As you may have noticed I have only put in some of pages, about 14 to start with. I shall add in more as need as the book fills up, and if it gets too full I suppose I can take some out from the beginning temporarily – it’s mine and it’s home-made so I can do what I like with it! So there. And finally, to keep the album from falling open and all the pages fanning open all over the floor I need some sort of enclosure. This stumped me for a while, and then I thought – shirt buttons! Better still cut the cuff off from one of the sleeves and use that. Just tuck the ends into the windows with a bit of glue stuffed in and Bob’s your uncle. Works better than it should considering what a wild idea it was.

No excuses now – just one thing to do, get my drawing stuff, go down to the Theatre and make a start! Watch this space.
Do you know Chipping Norton Theatre? It’s a wonderful place for a night out, whether it’s for a play, film, stand-up, pantomime, drama workshops, or even just a coffee and visit an exhibition on in it’s Gallery. www.chippingnortontheatre.com