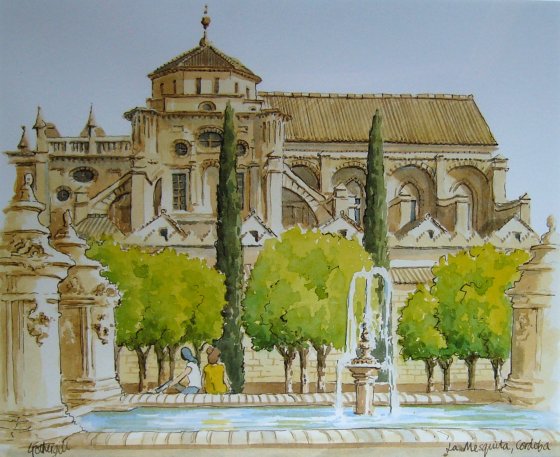 As soon I walked through the 14th century Moorish arch into the Patio de los Naranjos (Court of Orange Trees), a feeling of peace descended upon me. I’m not prone to these things, but water from a sculptural stone fountain played in the middle of a walled garden, set about with orange trees and some cypress. People sat here and there in the shade, or walked in slow contemplation, and the enclosed feeling of the walls was protective rather than oppressive. One obvious view called to me, so I parked myself in a shady corner, and out came the sketch pad.

At this point I have to produce some photographic evidence that some women can’t resist sidling up to an artist at work! Well, it makes up for the others. “Do you mind if I sit next to you and my friend takes a photograph?” Then they cuddle up to you for a minute, peering at your efforts. “Wow, that’s nice”. It makes my day. Pathetic, I know.

I toyed with looking around the vaulted Byzantine crypt of the Mosque that was on all the postcards. However, it was early evening, and I wanted more yet before knocking off.

An old woman caught my eye, sitting on the steps in front of an impressive arched doorway set into the walls of the Mosque. She had a blanket next to her with small things on it for sale. The way she sat, so still, seemed timeless against the huge old doors, so I discreetly made some quick sketches, and took a photograph, hoping to remember the atmosphere for a later painting. (I did paint it some months on, and sold the painting, but forgot to photo it for the records). I do have the quick sketch still; perhaps I shall paint it again.

I discovered in a café later on that I didn’t like Calamares.