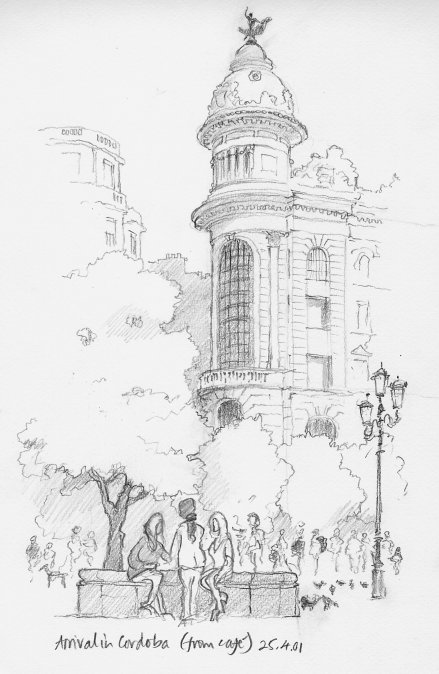 From an early age, the sound of the Classical or Spanish guitar has had a profound effect upon me, evoking moods or even memories, of places to which I have never been. I am not talking of the rhythms of Flamenco, but rather the more restrained music of the classical guitar repertoire. One evening in my early teens, I happened to see a television programme featuring the great guitarist Andrés Segovia, sitting in the Alhambra Palace playing ‘Memories of the Alhambra’, with fountains and shadows playing around a sunny courtyard. I was hooked, and embarked upon several years of lessons upon the instrument. To this day I intermittently attempt to play such classics as the “Suite Espanol” by Isaac Albeniz. ‘Seville’ ‘Cordoba’, and ‘Granada’ are the names of three of the pieces in the Suite; a series of musical postcards from Andalucia.Such are the romantic associations with these beautiful tunes, in my mind’s eye, that I was keen to visit all three of these old Moorish cities during the seven days of my visit to Spain. And so the next morning I packed my bags for Granada; hungry to visit the fountains and courtyards of the Alhambra Palace, which I knew rose up out of the city, into the foothills of the Sierra Nevada.

At least the bus station was next door to my hotel, so off I went to get a bus to the train station; only to be told that there were no buses connecting the bus and railway stations together.

Obviously no-one had thought of that.

It was a little over a mile across town to the railway station, but my mistrust of taxi drivers prevented me from making eye contact with any of them around me, so I set off on foot, clutching my heavy case to my chest. Forty minutes, I thought cheerfully; coffee en route.

Ten minutes later I slumped into a chair outside a shady café. The day was coming on hot, and my backpack had already soaked the back of my shirt. I had a coffee and croissant and watched Spain go by in the early morning sunshine. Duly refreshed, I stood, loaded my bags on board, and looked at the long straight road east. ‘Why am I so bloody mean?’ I thought to myself. I hailed the next taxi, and was at the station in ten minutes for less than the price of a beer.

Unfortunately there were to be no trains to Granada until much later in the day, but wasting a whole day out of my painting schedule travelling and waiting in stations was not on. There was a train to Cordoba almost immediately though, so I boarded that, rather enjoying the sudden change of plan; easy to accomplish when you haven’t booked hotels, and you have no travelling companion with whom to argue.

The railway terminus at Cordoba has a bus station adjoining it. This was much more promising. I had used the two-hour train journey to inspect the street map of Cordoba from my pocket guide, and locate two hotels I had found (on the Internet back at home) which were reasonably priced and handy for both the station and the old part of the city. No repeat of my experience in Seville thank you very much.

Misreading the signs, I found myself leaving the station through the bus entrance, running out of footpath, and eventually dodging coaches swinging through the vast arches that were not designed for pedestrian use. Realising I was at the wrong end of the shooting match, I turned in another wrong direction and tramped three sides around the entire station complex; a vast blank wall to my left the entire time; passing nobody except for one other person with a case struggling in the opposite direction. We avoided eye contact. My circumlocution presented me back to the top of some escalators, leading down to the platform where I had started. Dripping with great discs of sweat around my armpits, I realised that it could well be another one of those days. The hotels wouldn’t be far away though; I knew that.

They weren’t far away, they were just full.

Clearly internet advertising was successful for them. A largely fruitless further half-hour washed me up in a rather impressive square called the Plaza del Tendillas. Definitely coffee time.

One of the joys of being in Spain and Italy at the right time of the year (which is most of it) is sitting out of doors drinking coffee and watching the world go by. I could take it up full time in retirement. Probably die of caffeine overdose after eighteen months mind you. On this occasion I pulled out my sketchbook on the basis that if I couldn’t find a hotel, there’s no point in wasting the day. There was a girl feeding pigeons, which I made a passable impression of with my pencil, and behind her a tall elegant rounded façade of a building, topped with a white cupola, upon which perched a flamboyant equestrian statue. The sort of stuff I like to have a stab at. It was better than hotel hunting, and boosted my spirits. I was sure I was going to like Cordoba.

I didn’t for the remainder of the morning. It is a mystery to this day how, despite possessing an adequate street map of Cordoba, I found myself back at one of the hotels I had started with. Hesitating outside, I hastily constructed a sentence from my phrase book, returned inside, and asked the signor at reception if he knew of any other inexpensive hotel I might try. He must have understood me, as he was most forthcoming. I grasped most of his response through a series of mutual arm waving, nods and wild gesticulations; which go a long way in any language.

Focusing all my attention on retaining what tattered sense of direction I still had, I staggered under the weight of my bags for two short streets before rounding the last corner to confront; yes you’ve probably guessed by now, hand on heart and hope to die, the railway station was right in front of me, the hotel next door.

Handy for the journey back I thought. Chronically optimistic to the end.