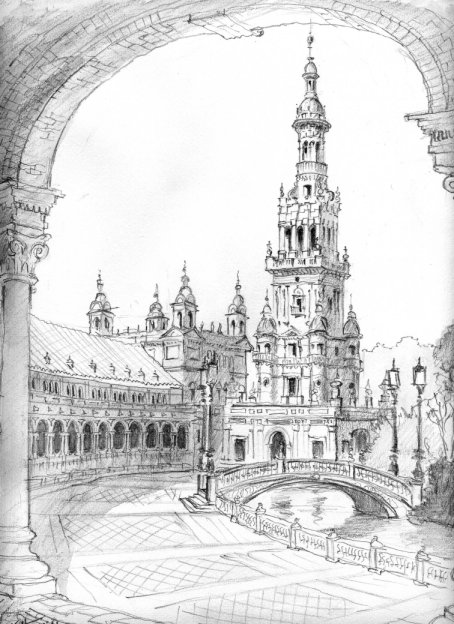 The first day had been a great success by my standards. My first painting was not a disaster, and I had two other drawings under my belt, which I liked, and could later paint from, in the studio. Giddy with my success I hopped out of bed the following morning, and promptly folded on to the floor. Ow! – My calf muscles had gone to jelly. How many miles had I walked the previous day? Not many, on the map, but the trouble with being in a foreign city, looking for interesting views, is that every side street beckons you down it, to just see what’s round the corner. Not having the restraining influence of my family, I cannot resist, and am lured by sirens up every avenue and down every street. Add to that the night of my arrival, tramping every inch of northern Seville with two heavy bags for hours on end, and my ankles were in rebellion. I resolved to be more disciplined, and conserve my time and energy for sketching.After a hot and reviving shower, I peered through the blinds of my hotel window to gauge the light (this is something artists do) and plan my day’s itinerary. It was an unrewarding experience, as the window opened into the bottom of a well in the middle of the hotel. Actually it didn’t open, but if I craned my neck upwards, with my nose on the glass, and head resting on the window sill I could just see a square inch of grey light at the top of the well, which I presumed to be sky. It was non-committal, and I had to wash my face again afterwards, so I decided to play it by ear, and presently stepped boldly out of the hotel front door into sunny Seville for painting day two.

Or rather I hobbled out on to a cool and overcast morning. The traffic by the bus station was smelly and I could have been on the Edgeware road in March. Now I’m not entirely a fair weather painter. Much as the sun always seem to shine in my paintings, experience has taught me to interpret, sometimes extensively, scenes before me. It’s called artistic license. Some people would call it taking bloody liberties with the truth, but then who wants to see parked cars, and ‘No Entry’ signs in paintings on the wall? Much better to leave out the rubbish, and if you have to put something in an otherwise uninteresting corner to stoke up the composition, have a woman walking a dog instead. An old painter friend once told me that, even if people are familiar with a view, you can leave out practically anything, and they won’t notice; but don’t put anything in that isn’t there, or they won’t buy it.

I used to think an artistic license was something you were given when you graduated from Art School, but being self-taught I never got one. Would that make me an illegal artist? What an exciting idea. Or I suppose I would only be practising illegally if I actually sold the paintings. Well most of the time I’d be alright then.

However, this morning my spirits were dampened. This was the sort of light that is my worst enemy. Heavy cloud, dark and glowering overhead, only lightening to the edges of the horizon. All around, dramatic perspectives, and rich architectural details were flattened, and drained of shadow, interest and colour. The bright spanish light I had come to revel in, and capture would prove elusive today. I wasn’t about to be beaten, but it was going to be a fight.

I stooged about. Drank some coffee, had my shoes shined again, bought some postcards, and wandered around the souvenir shops. Normally I love the souvenir shops, and only reward myself with them after earning a session with my painting efforts, but this morning even they lost their appeal. Maybe it’ll brighten up later I’d thought, but by mid-morning I was so awash with coffee I was like a walking hot-water bottle. It was time to grasp the bullet, so I bit the nettle by the horns and headed off to the Plaza de Espana.

The guide book had promised great things; a beautiful park, horse-drawn carriages, fountains playing in the sunlight (Huh!) and a sweeping curvacious slice of moorish architecture with towers, arches, bridges and lots of fiddly bits, which I usually like. Well I didn’t. It’s no good, I wasn’t in the mood. Even if I had liked it on a good day I wouldn’t have liked it then, and it wasn’t what I’d have liked on the best of days which made it even worse on a bad day. Oh you know what I mean. I was down in the dumps.

A lot of painting is about confidence. I don’t play cricket but I understand that morale has a profound effect on the game, even at the highest level. When the tables start to turn against a side, and a crack in the defences opens up, there can be a phenomenon known as a batting collapse. On a week’s painting trip this can be a real worry. It only takes a couple of bad or uninspired paintings, for the muse to flee in disgust (she is so fickle) and a batting collapse will ensue. Some would say just take the rest of the day off, and relax, but they don’t know how bad it can be to fail on paper, and, horrified with your efforts, feel as though you’ll never paint well again. It is as though the ‘magic painting cap’ I wear that enables me to draw, has been plucked from my head and thrown into the river. This may all sound over-dramatic, but I am inclined to be maudlin when I get fed-up. It’s part of the artistic temperament. (That’s my excuse).

The Plaza de Espana; alright it’s not my thing; but it is impressive. A vast and decoratively ornate structure, it was built in 1929 as a pavilion for the great Iberian-American Fair.(You didn’t go?) Intended to impress, it is a tribute to tiling, and depicts the many diverse regions of Spain in painted tiles all along the front of the collonade. It now serves the purpose of being somewhere to send the tourists in the middle of the day, where they can all go and photograph themselves and ease the congestion in the cathedral precincts.

I settled myself down behind an archway, and drew. It was something to do. Immediately below me, on the lower terrace, a woman was selling castanets, on a blanket, to passers-by. Clearly an expert herself, with a virtuosic flourish of limbs, she would reel off a loud rattling sound reminiscent of those rolling timetables in railway stations. She was doing a brisk trade, and the almost continuous rattling, punctuated by cries of “Castanets!” and a cackling laugh, lulled me into a sort of daydreaming stupor. Many people assume that when artists work, all their attention is taken up considering perspective and composition, or the relative merits of cerulean blue or gamboge, but this is far from the truth. My old Irish painter friend Geoffrey F.Woodworth reckoned that most of the time spent in watercolour painting was waiting for colour washes to dry. He used to practise playing his ukelele during such lulls in activity. Not having brought my ukelele with me (for health reasons) I found myself working up a limerick.

An old man from the Plaza de Espana
Would not stop repeating “Manyana”
His wife cried “You’re crazy!”
He replied “No, just lazy,
For why do today what, um….

Well that’s the trouble, I couldn’t find a rhyme for the last line. I suppose I should have considered that before investing my energy in the rest of the limerick; but my life doesn’t work like that.

It was still teasing me, and nearly cost me an accident crossing the Avenida de Carlos V, as I wandered into the Barrio de Santa Cruz. Now this was more like it. Whitewashed houses huddling around narrow cobbled streets; winding alleyways opening out into picturesque courtyards littered with café tables and people drinking and relaxing. Balconies overhanging with jasmine, terracotta roofs, pots and fountains. If I wasn’t going to stage a recovery here, then I might as well go back to my hotel room for a nap. (It did cross my mind) Rounding a corner, a composition caught my eye that was irresistible. A tall brightly painted house faced me, with flowery balconies, an arched colonnade at the top, pretty windows next to a café with a red awning, and…well all the rest. Perfect subject, rotten light. I would just have to use my imagination. On a good day, experience has taught me to pull a light cord in my head; switch on the sunshine; and see all the deep shadows in my mind’s eye. Sulkily, I took off my backpack, which cleverly opens out into a stool; sat on it, and went to work.

For such an ‘over the top’ subject, I chose to use pen and ink to draw first, and washed in bright colours; mauve in the shadows to make the scene as sunny as possible. After an hour, something was still missing in the middle – but what? It was all going a bit better than I had dared to hope. I didn’t want to ruin it now. A small nun with a walking stick conveniently tottered into view. Perfecto! A focal point; the small black and white figure complementing the two brightly coloured women in dresses standing by the front of the café on the right. In she went.

Definitely time for a beer. Who cares I’d skipped lunch and it was mid afternoon. I was back on track.