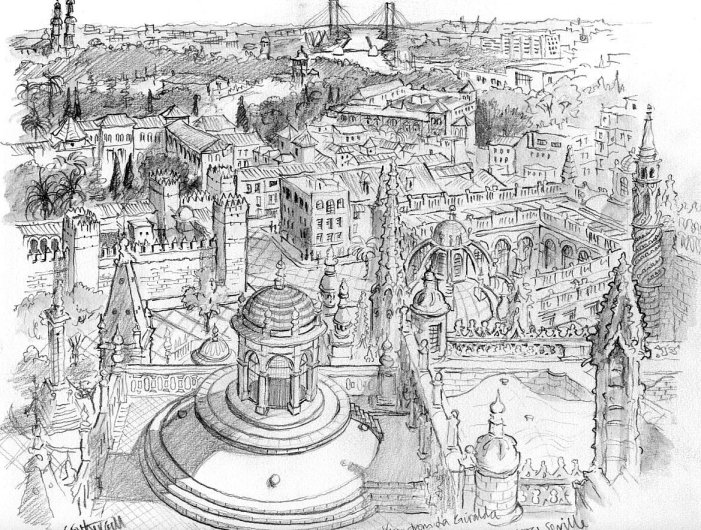 Seville Cathedral is big. Reputedly the third biggest in the world, topped only by St. Pauls in London, and that other big one in Rome. Visiting any such tourist hot-spot one has to fight off the sense of being a processed pea, amongst throngs of other visitors, turnstiles, gift shops, and those displays filled with illuminated slides. (Does anyone actually buy those things?) It was worth it. The entrance fee was modest, and atmosphere friendly and calm. Like many Cathedrals, the vast interior is broken up by a forest of huge fluted columns, thrusting upwards to a flamboyant ballet of gothic fan tracery, dancing away into the gloom.

David Roberts, the great Victorian painter depicted its interior; the columns as large as giant redwoods, people like ants at the bottom, and apocalyptic rays of sunlight lending a visionary air to the unbelievably huge scene. I found it a bit dark. Blinding sunlight outside, I nearly walked into some of the columns, the light was so poor, and that was after my eyes had adjusted. Huge banks of votive candles ablaze on all sides didn’t so much contribute to the illumination as dazzle one’s vision like oncoming headlights on a dark road. I stumbled around in the gloom searching for the entrance to the tower, haunted by my catholic upbringing, and wondering if it wasn’t perhaps time to think about glasses.

The ascent of the tower was a surprise. My expectation was of a never-ending narrow stone spiral staircase with occasional glimpses through slots in the wall, your eyes stinging with the wind in them as you peer out at a vista of one degree. In fact you ascend by a series of ramps that hug the inside of each of the four walls of the tower. Each ramp has a number at the top so you know how many there are to go.
I think there were thirty-six in all, but I’d have preferred steps, they’re easier on the calf muscles. I wondered if a European directive had ordered the Cathedral to fit the ramps for disabled access, but apparently the Moors built the tower so that they could ride to the top on horseback. What the hell does a horse want with a view across Seville? Personally I would have liked to do the ascent on a trial motorbike, although meeting a horse coming down the other way would be a worry.

Finally I emerged, with lots of other panting tourists, into the bell chamber, with openings on all four sides affording magnificent views across the entire city. The inside of the belfry was fascinating too; hung all about with impressive great bells, and an incomprehensible array of arcane machinery, pulleys, levers, cogs, chunky beams and brickwork, that’s about as far away from watchmaking as you can get in the timekeeping industry. I made a mental note to attempt a perspective drawing later, but first looked for a good angle across the city.

The view south had it for me. In all other directions an interesting, but compositionally meaningless, jumble of rooftops stretched away to grey suburbs in the distance; an endless uniformity of apartment blocks standing out there like an audience looking back at me. To the south though, I gazed over two beautiful cupolas sitting on lower roofs of the cathedral, which were worth drawing on their own. Festooned with turrets, carved stonework, rich in architectural detailing, and with buttresses flying everywhere, it was all most satisfying. As if that weren’t enough, beyond lay an aerial view of many of Seville’s finest monuments: the Alcazar fortress, the Plaza d’Espana, the Plaza del Triunfo, and the old Tobacco factory (now part of the University) which provided the setting for Carmen in Bizet’s opera, immortalizing an idiotically romantic notion of factory life in nineteenth century Spain. Finally in the distance the Guadalquivir River stretched to the horizon, spanned by a suspension bridge silhouetted against a blur of industrialisation, cranes and apartment blocks dotted about the greyness. I couldn’t wait to sharpen my pencil.

It is of course a ridiculously ambitious subject for a painting, but I didn’t care. The challenge of drawing it was irresistible. I was reminded of a boy on television some years ago, who had an incredible ability to take in such a cityscape at a glance, and then sit down and draw the entire thing from memory, both in perspective, and without any mistakes in the layout of the buildings or anything. He paid for this talent by having some sort of autism or other personality disorder. Sadly, although my personality is very disordered, I still have to do all my drawing whilst in front of the subject. Which is a shame, because it was a most uncomfortable position I had to stand in. Wedged into a corner, I was jostled and jogged constantly by rude tourists, pointing right across my face, and leaning digital technology of all sorts against my left ear. Occasionally someone would peer right into my drawing pad, so I could only see the back of their head, and then look back at me, as though I were from another planet. It may have been too hot for lunch earlier, but one hundred metres up, a howling cold wind was whipping my hair, and freezing my fingers, so I could barely hold the pencil.

Early stages of frostbite may account for me losing my pencil over the balcony edge at one point. (Actually I think a bored American youth was chewing gum so hard that his lower jaw knocked it out of my hand but I can’t prove it). This was more an irritation than a disaster, as long experience as a travelling artist has born fruit, and taught me to carry more than one pencil. My jacket bristles with pencils. The average stationary wholesaler would envy the stock of pencils I have built up in my jacket over the years. Pausing to sharpen up a spare, a disturbing thought crossed my mind. At breakfast one morning the previous week, my young daughter Charlotte had exclaimed;

“Dad, did you know that if you dropped 50p off the top of the Eiffel Tower, and it hit someone at the bottom, it would go right through them?”

Visions uncomfortably arose in my mind’s eye, as I could see some poor Japanese tourist gazing upward in rapt contemplation, to be cut down by a 2B graphite aquarelle, like Harold in the battle of Hastings. A distant siren howled far below in the city. I pulled myself together, sirens are always howling far below in cities.

The cupolas were finished and I was just wishing I’d left more room above them on the page, when a voice behind me spoke, and a hand touched me on the shoulder. I started, (nearly losing another pencil) and looking round my heart nearly missed a beat. A uniformed man addressed me in Spanish. I could see the headline

It was 4.30 and the tower was closing for the day.