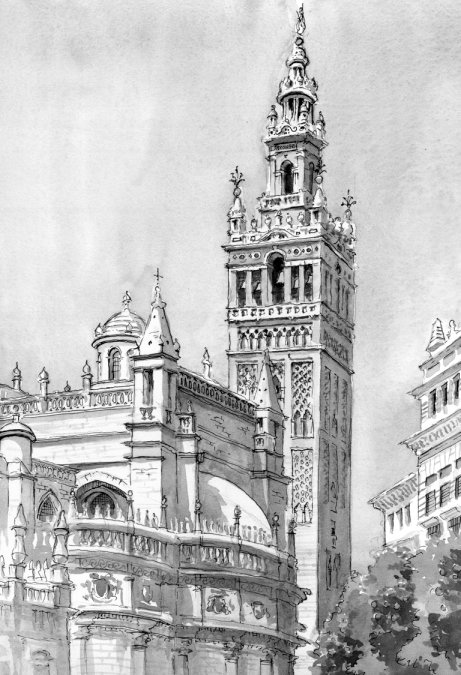 Apart from the flights I didn’t book anything in advance. It seemed a far more romantic notion to just arrive in Andalucia; me with a backpack, and a whole new world to be discovered. Inevitably, reality turns out to be a little more bracing than the sunny expectations of one’s dreams.

The flight was delayed, and I with my backpack, (and one heavy suitcase), was finally processed out of Seville airport at 10.30pm. It was a Sunday night, and the tourist information point, and in fact anything that looked like a useful counter, had the shutters down. There was no sign of a bus station about, only a line of predatory taxis outside, and a multi-storey car park in the gloom behind. Procrastinating, I wandered up and down, avoiding eye contact with smoking groups of taxi drivers. Eventually feeling conspicuous, I went back inside, and looked up some sort of equivalent to “how far, how much, centre of Seville, and cheap hotel”. I had no idea how many miles we were from the centre of town, or where I wanted to go, and I have a deep-seated mistrust of foreign taxi drivers. To them I must surely have appeared to be a walking bag of pesetas wearing a panama hat with “Take me for a ride” on the front.

However the hour was late and I had to find a hotel. I took a deep breath, and strode purposefully out into the night. Right in front of me was a bus with ‘Sevilla Centro’ lighting the windscreen.

One hundred and thirty pesetas later (50p) I stepped off on to the Puerta de Jerez, a sort of Picadilly Circus but thick with palm trees and exotic scents. As I crossed the road, a happy band of revellers rounded the corner. Four beautiful young women in full flamenco dress, escorted by two handsome young swains carrying guitar cases, passed by, clearly on their way to, or from, a wonderful evening. They were young, happy and singing, and a frisson of excitement lifted me on to the Avenida de Construction to go and find all those cheap and plentiful hotels mentioned in my Insight Pocket Guide to Southern Spain.

A very useful book with maps, itineraries; where to find whatever it is you mustn’t miss for how much, and how to use the telephones. I had done some homework in advance, so headed for the Cathedral, as I was sure that just to the north of it was deepest hotel country. Suddenly, a spectacular glimpse of “La Giralda”, the pinnacle of Seville Cathedral, came into view. A famously beautiful Moorish minaret, capped with a Christian belfry, it was floodlit against a sky of black ink, and scores of swallows caught in the light were soaring and swooping high above the tower, seemingly as excited as I was to be there. I walked on air to my hotel.

An hour and a half later I hadn’t found it. According to the map I had walked every street in Northern Seville, and hadn’t even found a single hotel, let alone one that was cheap, or even open. I exaggerate. There was one facing me, on the opposite side of a huge square, by the bus station. The huge glass lozenge filled most of my vision, announced “El Splendido” over the door and had more stars than I could see in the sky. Could I really spend my entire weeks allowance on a few hours kip?

My suitcase had become an unspeakable burden, particularly since the strap had parted company with the rest of the case as I’d come off the bus. My ankles hurt, my arms trembled with fatigue, and all that prevented me from kipping on a bench under a palm tree was the thought of all the undesirable types that seemed ever present in the shadows all around. I just wanted to stop, but standing alone at midnight with luggage, and hat on, I couldn’t seem to merge in with my surroundings.

In the distance a star winked at me. It was a neon sign announcing “HOSTAL” in vertical letters that was malfunctioning and flickering. I was drawn to it, like the Magi to the Star of David. In a narrow side street a dimly lit door protected with wrought iron supported a sign saying ‘Empujar’. My heart sank. The words ‘Closed’ and ‘Full’ sprang to mind. Wearily I disengaged my luggage, extracted a pocket Spanish dictionary from my backpack, and thumbed through its pages, straining my eyes to finally read the word ‘Push’.

Three flights of stairs later, I delivered the sentence from my phrasebook that I’d been rehearsing all evening; and after lots of waving of arms, pointing and nodding, keys rattled in a door and I flopped on to a bed. Perhaps presumptuously, I thanked my guardian angel, saying, “We did it!”