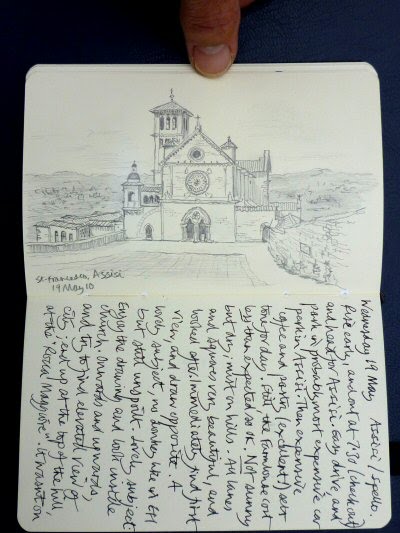 Rise early, and out at 7.30 (check out of farmhouse) and head for Assisi. Easy drive, and park in probably the most expensive farmhouse in Assisi. Then an expensive coffee and pastry sets the tone for the day. Still, the farmhouse cost less than expected as it was early season. Not sunny, but at least dry; mist on the hills. All lanes and piazzax are very beautiful, and well cared for. Immediately find the first view, of the Basilica of St. Francesco, and draw in sketchbook. Unchanged but for the foreground; no donkey like in EH, but still unspoilt. Lovely subject, enjoy the drawing and look inside the church. Onwards and upwards; end up at the top of the hill at the ‘Rocca Maggiore’. It wasn’t on my agenda, but as I’d made the effort to get to the top, and couldn’t find the other view I was after, it looked a promising subject.

After all the ‘industry of St.Francis I had experienced below, it was something primal, and of the earth, this crumbling fortress, rising against the great hills all round; the mist and clouds rolling past, heightening the senses. I drew the impression (in the sketch book) and then, quite literally stumbled on the rough ground across the vies that until that point had been denied to me, looking down and across the church of Santa Chiara and the Duomo San Rufino. This was simply entitled ‘Assisi’ in Eh and beautifully painted by the artist ‘A.Pisa’. I didn’t recognise it immediately, as the foreground has sprung up with very large cypress trees in the last century!

Another drawing in the sketchbook from the same angle and I was very pleased with it as it has potential and am grateful to have located the view. Having finished the drawing, rain was threatening, so it was time for coffee and to regroup. On descending the hill, the heaven opened, so I made for the car, but was unable to retrace my steps to find the Mojana car park. Soaking wet, I walked in a big circle before asking the way, and squelching my way back to the car park, which relieved me of 9 euros for my day. Ah well, what’s an hour?

The rain was now incessant, so I gave up on Assisi, and headed for the next hotel, outside Todi, but as the afternoon was still in hand I thought I would call at Spello, for a late luch and seek out the ‘Porta Veneris’ which looked intriguing in EH.

I arrived surprisingly easily in Spello, parked free, and straight away came across the Porta Veneris. Never mind lunch, the rain was easing off, so I took some photos and tried to settle to a view. Now after all the churches and excitement of Assisi, an old Roman gate may not seem so much, but it has changed very substantially since 1905. It seems to me that two or three dwellings; little more than hovels, had been built around the structure by the look of plates in the old book, but these have now been long since demolished. Why did ‘A Pisa’ choose to paint this gate twice, once from above, and once below? It doesn’t seem an important subject, but he must have liked it. And so, what best for me to draw now? I puzzled and photographed, and had another coffee whilst deciding and looked around the rest of Spello (Northleach sized – didn’t take long!). When I returned to draw, it was still raining a bit, and I tried for a while to draw, but these pages refuse to take graphite when wet, the pencil slides about to no avail. The rain wouldn’t stop, and then a group of unusually forward and quite cheeky Italian schoolchildren chased me away. I usually like schoolchildren, but these were a bit out of control, and got up my nose. So I left Spello in the rain, but with some satisfaction to have explored another view from the book in a short time.

A lot of fun and games finding the road from Spello to Acquasparta cross country (but scenery to die for en route from Spoleto despite the lack of sunlight). Challenging driving, but the little diesel Lancia Ypsilon laps it up! Unfortunately my Google print out fails me – the hotel is nowhere to be found, so I phone up, and they’re actually several miles away in Colevalencia instead. The Holiday Hill Hotel is comfortable with a large swimming pool, bar, restaurant etc. But am I the only guest? The pool is drained, the bar and restaurant closed and all is quiet, only two other cars there. So I shower and shave and come down for a glass of wine (the bar is opened for me) and I sit alone on the sofas in the lobby writing in this book! The opposite of Perugia Farmhouse. I realise as I sit here that apart from a pastry for breakfast I haven’t eaten all day. Feel OK – the second glass of wine is getting through. Slap up breakfast in Todi tomorrow then?