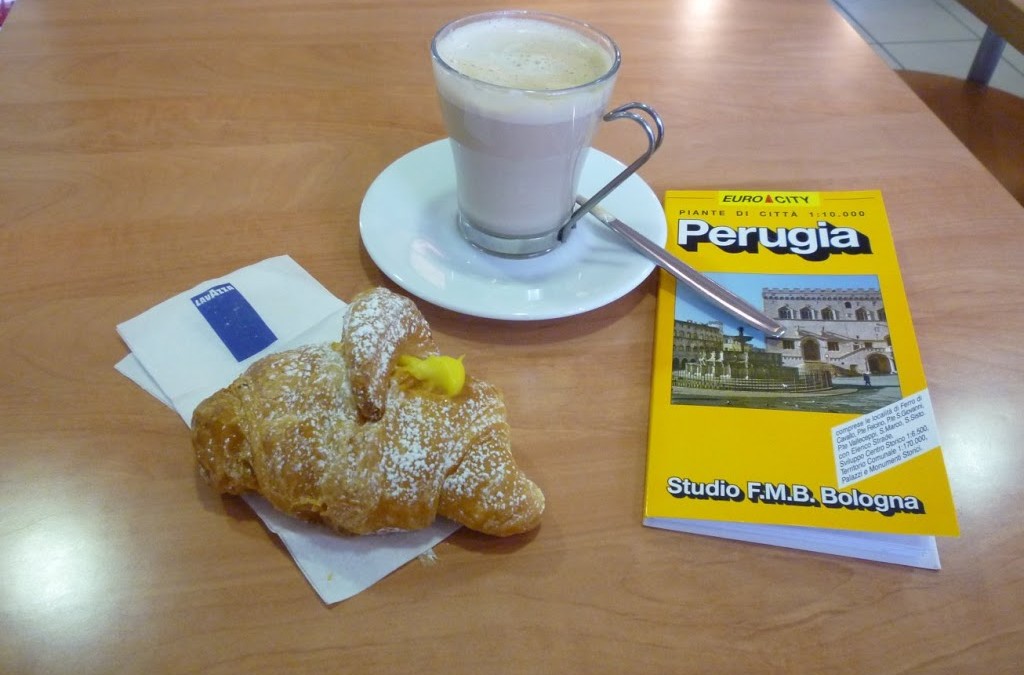 Well, last night was good value. After two more beers at the ‘Bar Olympia’ I was best friends with ‘Salvatore’, an enthusiastic local who engaged me in conversation; his English not much better than my Italian but we were helped by the girl behind the bar who had worked in England. I bought him a drink, and whilst he smoked one of my cigars he pulled me aside and told me “not to trust the Perugini”. He said his family comes from Naples, but the Perugini are very close. They don’t like outsiders, although once they accept you they will look after you like family. Me, Stefano (the bar owner) and Lucky ( his dog) were all great pals by the time I left. There’s a wonderful view from the Farmhouse, a  panorama of blue green hills which were all twinkling in the half-light as I returned along the track to be greeted by the farm dog, the geese and the cockerel.

Later on Monday, rained off in café in Perugia.

Bus into Perugia – the road surfaces are awful! I nearly took my teeth out and put them in my pocket, it was so boneshaking. The outskirts of Perugia are typical urban Italy; noisy, fumy, industrial, confusing and wearisome to the pedestrian. Then suddenly through an old gateway, and we go back in time. The Palazzo Pubblico has not changed at all, although it is now known as the Palazzo dei Priori. I did a drawing in this sketchbook with no cheating at all and it was much the same as the Plate 2 from EH.

Eventually I found the Porta Augusta, but it is known here as the Arco Etrusca which threw me off the trail. I arrived to find it a gridlocked traffic nightmare, with no goatherd driving goats in front of it. There was a café though, and after a coffee, I drew the second sketch form exactly the same angle as in Plate 1 of EH and it too is quite unchanged. A hundred years on it still looks as though it is about to fall down! After that I got lost as usual. Oh, plate 3, the Piazza del Mercato, was the there but without a market there, there wasn’t much to draw, so I moved on finding a view off the edge of the city across the hills. I was about to embark upon a drawing, but was seriously rained off, so I’m huddled here until the rain passes.