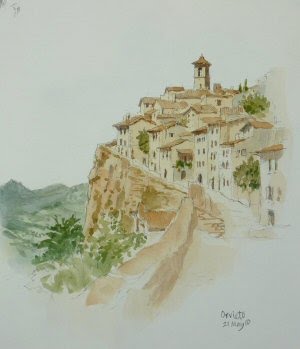 Promising morning, and wind my way across country to Orvieto, but on reaching the outskirts a moment’s inattention causes me to be swept on the toll paying Autostrada from Rome to Florence! After 23 kilometres of drumming my fingers on the steering wheel I come off at a small town called Fabro. To calm myself I stop at a bar for a coffee.

As in all small towns in Italy, you can go through a single darkened doorway in a shabby façade, but inside is a spotless counter showcasing mouthwatering pastries, and all is inviting and smells like heaven. The young woman serving was on her mobile, but looked quizzically at me. I removed my Panama (now sadly deteriorating) and said “Un cappuccino and uno di questi” pointing to a custard filled confection with my name on it.

She multi-tasked admirably, and I was much cheered by the delicious fare which I gratefully consumed sitting between the enormous TV screen showing football, and another elaborate screen with Lotto information on it. Two older men cheerfully shouted across the room at each other at intervals, and I felt glad to be in Italy. On paying, she was still on her mobile talking, but with eyebrow movements, and pointing at the till, she conveyed to me that she needed 1.80 euros. Now that was good value! Before getting  back into the car, I paused to smoke a cigar in the street for a few minutes, and watched the town of Fabro go about its business at nine in the morning.

Now Fabro is about as remote a town as you will find in the heart of Italy. On the borders of Umbria and Tuscany it’s near to, well, it isn’t near to anywhere, or at least nowhere worth mentioning. And yet it looked both prosperous and thriving. It had many well kept shops, and seemed tidy and up to date. The residents as far as I could tell were friendly and content. I wanted to live there. Climbing back into the car, I waited for a tractor to pass, then pulled out behind it, hoping it wasn’t going all the way to Orvieto. A hundred yards later he turned into a layby and gave a cheery smile and wave as I passed. I decided to drive the 23 kms back to Orvieto on the ‘ordinary ‘ road as I couldn’t face the Autostrada again, and didn’t want to end up in Rome. The route was about as straight as an unravelled small intestine, but much prettier!

Orvieto was a delight from the moment I arrived. Way up on a platform of volcanic rock, with sheer edges; where Todi is soft and inviting from its approach, Orvieto is forbidding and defensive. But once you have climbed its natural ramparts, and parked up, it’s a different story. The gardens (Guardini Pubblico) have to be wandered into before tackling the climb into the rest of the city. Leafy and sun-dappled with views over the outcrop that are breathtaking, across the soft inner heart of the region, one is fortified for the climb to the Duomo and the day ahead.

I spent the first hour or more exploring, and taking as many photographs as possible while the sun was revealing Orvieto in all her magnificence and intimate detail. A good move as the afternoon became overcast. Finally I came to the Duomo, which is of course entirely unchanged since EH. It’s all about colour, the façade, but I couldn’t spend the time to paint, so the sketch in my book had to suffice. I enjoyed sitting in the same spot as ‘A.Pisa’ from 1903 or whenever, when he too had to size up the daunting perspectives involved.

Like me, I’m sure he sketch first and painted later on this occasion. On the city walls find a pleasing angle with the tower of S. Giovanni in. Draw it and colour wash on new cartridge block purchased today.

Press on to draw church of Sant’ Andrea with its unusual 12 sided bell tower. Not the prettiest, but an interesting church and history and a charming piazza. Get distracted on the way by a back street view, which I stop to draw on impulse (also in cartridge block). Feel very satisfied as I hurry back to the card to save feeding any more euros into the car park meter.
The return journey via Todi was blessed by early evening sunshine, perhaps the best of the day for revealing the landscape at this time of the year.

As far as the colour plates in the original book ‘The Cities of Umbria’ are concerned, I have now visited all of the ones I had intended to; excepting one in Assisi and one in Perugia, both of which I was unable to find, but neither of which are of importance, but rather are compositions which the artist came across by chance originally, much as I have done in the others I have included so far. Two more days to go; what next?