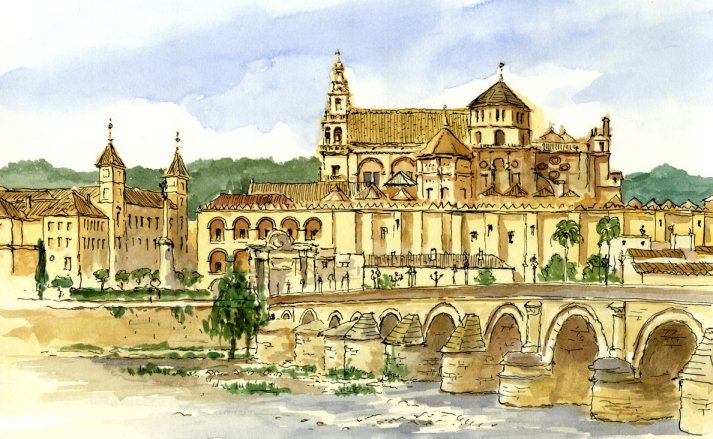 Showered and refreshed, I emerged back on to the street, bordering on to the railway sidings that my modest hotel overlooked, in what was clearly an unfashionable quarter of the city. Just as when you bang your head for long enough against a wall, it’s lovely when you stop; the absence of clutching a heavy suitcase raised my spirits considerably. Also it was only one o’clock, the sun was shining in a clear blue sky and Cordoba was waiting for me.If one wishes to sketch in an unknown city, then it pays to visit the postcard stands first. They will present all the best and most obvious views the place has to offer, and it saves a lot of time. Of course one may not wish to paint merely the ‘postcard views’. There are many more subtle and interesting subjects and compositions one can tackle, given a certain sensitivity and imagination.

It would be a shame to miss the blockbusters, though wouldn’t it? Imagine going to Sydney, and not realising until you came home that there was an opera house with a bridge next to it.

One view that was clearly a cracker, from the number of postcard spinners that paid tribute to it, was the skyline of the old city of Cordoba. Looking from the south side of the river, back across the Roman bridge, the fabulous Moorish Mosque ‘La Mesquita’ dominated the composition, hills blue in the distance cooling the heat of the stone in the foreground. More importantly, it was my sort of view, so out came the paints.

For an hour or more, I quietly worked up a rough and ready pen and ink and colour wash impression of the scene. I was quite pleased with it; a nice souvenir, and good to paint from later. Boy the afternoon was hot though! I was working in a spot with no shade, and in my earlier excitement had left the hotel without my hat. Working with the sun behind me, I could manage, but I needed a break, and some shade.

Now some people may wonder why the stereotypical artist wears a silk scarf or cravat, and a wide brimmed hat. Style, yes, and maybe all artists are posers. But I have discovered the origins of such attire. Very early on in my painting career I discovered that if you tried to paint ‘into the light’ ie facing the sun, then within minutes you are blinded to colour and you cannot see anything you are drawing or painting on your pad. So, you turn the other way, and draw what’s behind you. Ah, that’s better. Two hours later you have finished, but on packing up, you find the back of your neck is red as a lobster. So; the brim on the hat acts as a sunshade when you paint towards light, and the silk scarf protects your neck from sunburn. Quid pro quo. Ergo factum and all that. Alright so these days you can wear sunglasses and a baseball cap on backwards, but it’s not me, OK?

Seeking refreshment, I read in my guidebook that the Mosque I had been painting had a courtyard with fountains and shade within its precincts, so off I went for my next drawing stop.