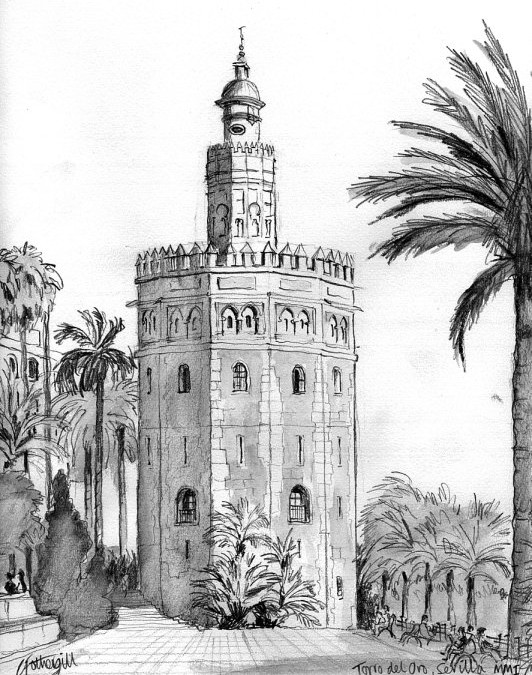 Endless souvenir shops, outdoor cafes and warmly inviting streets provided displacement activities that carried me to that time of day when its too early to go home, but its too late to start much new. My ramblings had taken me to the banks of the Guadalquivir river, which provides a beautiful breathing space from north to south through an otherwise hectic city. At the end of a long paved promenade stood an impressive single round tower, set about with palm trees. I recognised it from lots of travel brochures, so guessed it must be important. The Torre del Oro or ‘Golden tower’ was a thirteenth century Almohad fortification, so called because it was once covered in gilded azulejos (whatever they are – they’re not in my phrasebook).
The early evening light provided perfect shadows in all the right places, so out came the sketchbook, and a happy relaxed hour passed, with happy relaxed people wandering around in the warm sunshine, nobody in a hurry to go anywhere.Have you ever had a picnic by the river with cattle nearby? If so, you will have noticed that eventually their curiosity overcomes their natural animal shyness; and before you’ve poured the tea out there’s a pitch invasion, and they’re trampling the cucumber sandwiches. Well, painting in public places is just the same. In what other circumstances would a single man be sitting alone, and have single women come along and strike up a conversation, even ask personal questions and sit close to you? As a friend of mine pointed out recently – “Sounds a great way to draw the birds!” I don’t draw birds of course.

So there I was, minding my own business and perhaps feeling a little too pleased with my own work, when this rather attractive dusky Spanish woman looks over my shoulder and murmurs praise and encouragement in broken English. This intrusion was a little less invasive than cows at a picnic, so I happily struck up what conversation I could with the little vocabulary we had in common. Mostly I just nodded and smiled, like those toy dogs that you used to see in the back windows of the cars in front. Then she suddenly asked a direct question;

“Would you do a painting of my niňa?”

My throat went dry and I swallowed. I had no idea what a niňa was, but my imagination ran riot. This wasn’t the sort of proposition one got every day, even in England. I gave a sort of nervous laugh, saying “Uno momento…” and turning with my back half to her, rummaged through my bag for the pocket dictionary. I can’t tell you what went through my head before my finger ran down the appropriate page and found the translation ‘daughter’. I looked up and saw her little girl running up to us. She was very pretty, but I don’t do portraits, so I had to disappoint her.

Time to knock off for a beer then.